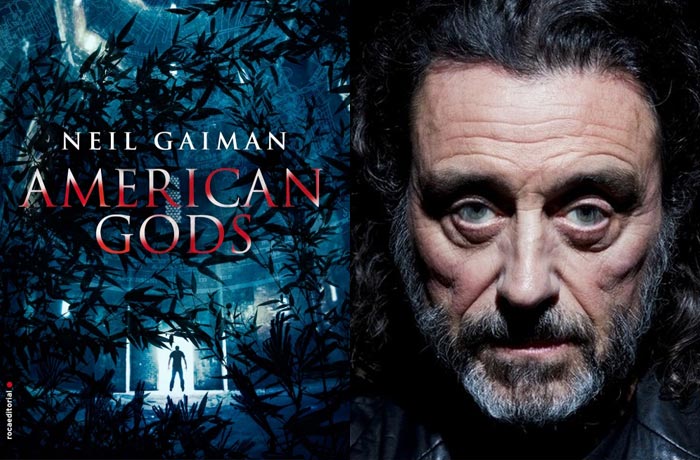 On April 30, Starz debuts in the United States the series American Gods, adaptation of the novel with the same name of the famous author of dark fantasy Neil Gaiman. Just 24 hours later, on May 1, Amazon Prime Video will premiere it in our country.

Neil Gaiman is a prolific English author, writer of comics and writer of novels and countless short stories of dark fantasy and science fiction. His most popular and emblematic work is the series of comics The Sandman (entangled years ago in a possible film adaptation). Several of his works have been taken to the movies and television and now, finally, we have the possibility to see one of his best works.

AMERICAN GODS, ONE OF THE BEST NOVELS OF NEIL GAIMAN

American Gods is Neil Gaiman’s fourth novel, published in 2001 and received such prestigious awards as the Hugo Award, the Nebula Award, the Locus Award or the Bram Stoker Award, all of them for the best novel. Being an ingenious blend of American folklore and universal mythology, many of his themes come from his previous graphic novel The Sandman and are intertwined with later stories such as The Sons of Anansi, Monarch of the Glen (which continues with the travels of Shadow, protagonist of American Gods) or some short story like Keepsakes and Treasures.

Like the original novel by Neil Gaiman, the new series that Amazon Prime will bring us in May introduces us to the story of Shadow, a convict who hurried out of prison due to the death of his wife in an accident. Upon leaving, he receives a strange job offer from a mysterious man, Mr. Wednesday, who offers him work as a bodyguard. Together with him he will begin a restless journey, during which he will not only have to face the ghosts of his past, but will realize that he has gotten himself into the inevitable confrontation between the ancient and new gods.

The series reflects a different America in which the ancient and traditional gods live hidden among humans, struggling to regain their lost power and in constant war with a pantheon of new gods whose behavior reflects the ways of the present society in the love for Money, technology, the media, celebrities and drugs.

The series has been developed by Bryan Fuller and Michael Green with a wide participation of the same Neil Gaiman that acts like executive producer. As for the cast, we can see Ricky Whittle (The 100) as the ex-convict Shadow Moon; Ian McShane (Deadwood) as Mr. Wednesday; And Emily Browning (Sucker Punch) as Shadow’s wife, Laura Moon. It will also feature the presence of Gilian Anderson (X Files) as Media, spokesman for the new gods; Pablo Schreiber (Orange is the New Black) as Mad Sweeney; Yetide Badaki (Masters of Sex) in the role of Bilquis; Bruce Langley as Technical Boy; Crispin Glover as Mr. World, Jonathan Tucker as Low Key Lyesmith; Peter Stormare as Czernobog; Cloris Leachman as Zorya Vechernyaya; Orlando Jones as Mr. Nancy; Demore Barnes as Mr. Ibis; And the recently announced Kristin Chenoweth as Easter.